An Introduction to Transfection

Transfection is the process of inserting genetic material, such as DNA and double stranded RNA, into mammalian cells. The insertion of DNA enables the expression, or production, of proteins using the cells own machinery. Whereas insertion of double-stranded RNA is used to shut down the production of a specific protein by stopping translation. This powerful tool has allowed researchers better study gene function and expression, protein function, and genetic mutations.

No single transfection reagent or method works for all cell types. Fortunately, many methods and reagents have been developed in the past few decades to facilitate transfection of a wide variety of cells. These methods can be separated into two main groups: chemical and physical transfections.

In this video, we will focus on the different chemical delivery systems, as they have become increasingly common in recent years. These methods include lipid-based approaches, calcium phosphate mediated transfection, and the use of cationic polymers to name a few.

Summary
Transfection is the process of inserting genetic material, such as DNA and double stranded RNA, into mammalian cells. The insertion of DNA into a cell enables the expression, or production, of proteins using the cells own machinery, whereas insertion of RNA into a cell is used to down-regulate the production of a specific protein by stopping translation. While the site of action for transfected RNA is the cytoplasm, DNA must be transported to the nucleus for effective transfection. There, the DNA can be transiently expressed for a short period of time, or become incorporated into the genomic DNA, where the change is passed on from cell to cell as it divides.

This video describes the basics behind chemical mediated transfections and introduces some of the most commonly-used reagents, including charged lipids, polymers, and calcium phosphate. Each step is described from the preparation of cells for transfection through analysis of transfection efficiency. Additionally, the applications section of this video-article describes the use of electroporation and a biolistic transfection as alternative methods for introducing nucleic acid into mammalian cells. It also describes an advanced use of transfection where co-transfection of interfering RNA and DNA are introduced as a way to down-regulate a naturally occurring protein while at the same time producing a mutant variant of it within the same cell. 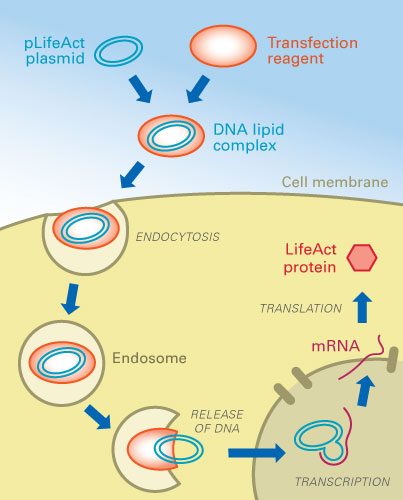