IL-10 is a regulatory cytokine that plays a major role in the homeostasis of the gut and this is illustrated by the fact that IL-10 -/- mice develop colitis spontaneous colitis. In this study, IL-10 -/- mice were analyzed for immunological changes during colitis development. We found a reduced frequency of regulatory T cells CD4+CD25+Foxp3+ and higher frequency of activated T cells in the colon that precedes the macroscopic signs of the disease. Production of IL-17 and IFN-γ was higher in the colon. Colitis progression culminates with the reduction of CD4+LAP+ regulatory T cells in the intestine. Frequency of B1 cells and the secretory IgA production were both elevated. Despite these alterations, 16-week-old IL-10 -/- mice could be rendered tolerant by a continuous feeding protocol. Our study provides detailed analysis of changes that precede colitis and it also suggests that oral tolerance could be used to design novel alternative therapies for the disease. 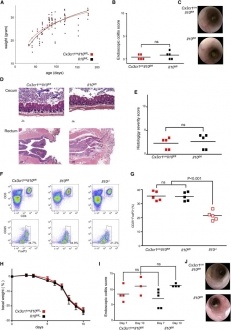