Inflammatory bowel disease (IBD) encompasses a range of intestinal pathologies, the most common of which are ulcerative colitis (UC) and Crohn’s Disease (CD). Both UC and CD, when present in the colon, generate a similar symptom profile which can include diarrhea, rectal bleeding, abdominal pain, and weight loss.1 Although the pathogenesis of IBD remains unknown, it is described as a multifactorial disease that involves both genetic and environmental components.2 There are numerous and variable animal models of colonic inflammation that resemble several features of IBD. Animal models of colitis range from those arising spontaneously in susceptible strains of certain species to those requiring administration of specific concentrations of colitis-inducing chemicals, such as dextran sulphate sodium (DSS). Chemical-induced models of gut inflammation are the most commonly used and best described models of IBD. Administration of DSS in drinking water produces acute or chronic colitis depending on the administration protocol.3 Animals given DSS exhibit weight loss and signs of loose stool or diarrhea, sometimes with evidence of rectal bleeding.4,5 Here, we describe the methods by which colitis development and the resulting inflammatory response can be characterized following administration of DSS. These methods include histological analysis of hematoxylin/eosin stained colon sections, measurement of pro-inflammatory cytokines, and determination of myeloperoxidase (MPO) activity, which can be used as a surrogate marker of inflammation.6 The extent of the inflammatory response in disease state can be assessed by the presence of clinical symptoms or by alteration in histology in mucosal tissue. Colonic histological damage is assessed by using a scoring system that considers loss of crypt architecture, inflammatory cell infiltration, muscle thickening, goblet cell depletion, and crypt abscess.7 Quantitatively, levels of pro-inflammatory cytokines with acute inflammatory properties, such as interleukin (IL)-1β, IL-6 and tumour necrosis factor (TNF)-α,can be determined using conventional ELISA methods. In addition, MPO activity can be measured using a colorimetric assay and used as an index of inflammation.In experimental colitis, disease severity is often correlated with an increase in MPO activity and higher levels of pro-inflammatory cytokines. Colitis severity and inflammation-associated damage can be assessed by examining stool consistency and bleeding, in addition to assessing the histopathological state of the intestine using hematoxylin/eosin stained colonic tissue sections. Colonic tissue fragments can be used to determine MPO activity and cytokine production. Taken together, these measures can be used to evaluate the intestinal inflammatory response in animal models of experimental colitis. 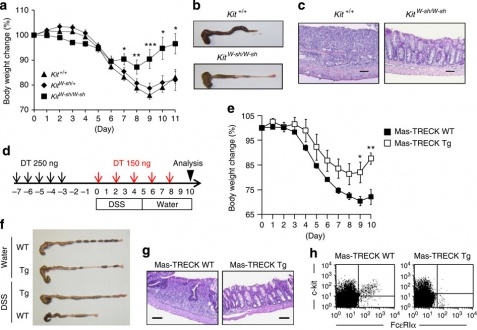