Mouse models of allergic airway inflammation have proven essential in understanding the mechanisms and pathophysiology underling human asthma. There is a diverse range of mouse models described in the literature that typically vary slightly by allergen, duration of exposure, and route of sensitization. In general, each of these models has proven to be acceptable surrogates for studying specific aspects of the human disease, including airway inflammation, airway hyperresponsiveness (AHR), and airway remodeling. Here, we describe a highly versatile model based on nasal sensitization with house dust mite antigen (DMA). Mice receive multiple intranasal inoculations with DMA each week for a period of 4–16 weeks, which results in increased Th2-mediated airway inflammation and AHR. However, an added feature of the longterm exposures described here is the ability to more accurately evaluate the impact of chronic inflammation on airway remodeling and lung pathophysiology in response to a clinically relevant allergen. 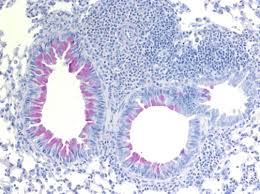